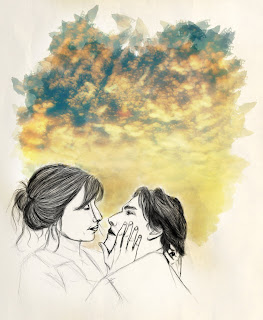 David: How 'bout if you help me, unless I'm honing in here.
Sofia: You are, but the food's good.
David: See, I've got this little problem. I've got a stalker.
Sofia: It doesn't sound life-threatening.
David: But I need a cover. I need for you to pretend we're having a scintillating conversation, and you are wildly entertained. I know it's tough.
Sofia: I'll improvise.
David: She's across the room and burning a hole in my back now, isn't she?
Sofia: Red dress, strappy shoes? Wow. She's really staring at you.
David: Shit.
Sofia: And she seems to be growing.. less happy. I think she's the saddest girl to ever hold a martini.
-Vanilla Sky (2001)-

A good film is what I call a  pleasure delayer; you’re not aware that it’s delayed because the yearning for entertainment is a curiosity. The delivery is impeccably timed to be captivating; at the least, it’s set to be unexpected. In my mental rolodex of movies, I found a few scenes where the dialogue can make the film; the dialogue is an integral part of the story’s development. In the previous scene David is attempting to stay away from a certain admirer, a transparent excuse to entertain Sofia whom he’s had his eyes on from the start. He tries to convince her that saving him from a dangerous stalker is worth the conversation at least for the moment. And so begins the story inside the story; if a film is to captivate the audience it has to have a few layers.

Roger is seated at a table on the train while trying to disguise himself from the authorities. He finds himself seated across from a beautiful stranger, who doesn’t appear to be so strange after all.

Roger: Oh, you're that type.
Eve: What type?
Roger: Honest.
Eve: Not really.
Roger: Good, because honest women frighten me.
Eve: Why?
Roger: I don't know. Somehow they seem to put me at a disadvantage.
Eve: Because you're not honest with them?
Roger: Exactly.
...
Roger: The moment I meet an attractive woman, I have to start pretending I have no desire to make love to her.
Eve: What makes you think you have to conceal it?
Roger: She might find the idea objectionable.
Eve: Then again, she might not.


Such a dialogue leaves the impression that while the movie might be fictional there is a hint of reality. Sometimes you even go as far as to wonder if it’s fictional or perhaps an account of a writer’s life. Take for example the next one where a stylish young man spots a beautiful woman across the way at a bar. Watching every potential customer get swatted away by rejection, he has to conjure a better than average line to gain her attention. The delivery and the exchange require perfection.

Alex "Hitch" Hitchens: Now, on the one hand, it is very difficult for a man to even speak to someone who looks like you. But, on the other hand, should that be your problem?
Sara: So life's kind of hard all around.
Alex "Hitch" Hitchens: Not if you pay attention. I mean, you're sending all the right signals - no earrings, heels under two inches, your hair is pulled back, you're wearing reading glasses with no book, drinking a Grey Goose martini, which means you had a hell of a week and a beer just wouldn't do it. And if that wasn't clear enough, there's always the "fuck off" that you have stamped on your forehead. because who is going to believe there is a man out there that can sit down beside a woman he doesn't know and genuinely be interested in who she is, what she does, without his own personal agenda?
Sara: Yeah, I wouldn't even know what that would look like. So what would a guy like that say?
Alex "Hitch" Hitchens: Well, he'd say, "My name is Alex Hitchens and I'm a consultant," but she wouldn't be interested in that because she would be just counting the seconds until he left...
Sara: ... thinking he was like every other guy...
Alex "Hitch" Hitchens: ... which life experience has taught her is a virtual certainty... but then he'd ask her name, and what she did for a living and she might blow him off, or she might say... ?
Sara: "I'm Sara Melas and I run the gossip column at The Standard." Then he would ask all these penetrating questions about it because he's sincerely, if atypically, interested...
Alex "Hitch" Hitchens: No.
Sara: No?
Alex "Hitch" Hitchens: He'd be interested... but he would see that there was no way of possibly making her realize, that he was for real.
Sara: Ah... he could be funny, and charming, and refreshingly original.
Alex "Hitch" Hitchens: Wouldn't help.
Sara: Don't ya hate it when that happens?
Alex "Hitch" Hitchens: Not really... they'd probably both lead the lives they were headed toward, and my guess is... they'd do just fine. It's a pleasure to have met you, Sara Melas.

And that’s why we love a good delivery a good dialogue, a story within a story. All the reason’s why we watch.